The pudendal nerve is the main nerve of the perineum. The perineum is the area between the testicles and anus of a man, and the vagina and anus of a woman. When this nerve suffers an injury, it can result in the most chronic and disabling form of pelvic pain, pudendal neuralgia.[1]

Infrequency, however, does not change the fact that pudendal neuralgia is a debilitating and extremely unpleasant condition. The agony can become so intense, individuals are unable to urinate, have intercourse, or even sit without experiencing intense, shooting, burning pain in the genitals and seat region.

Pudendal neuralgia is an uncommon and complex diagnosis distinct from other forms of chronic pelvic pain. Fortunately, the physicians at the Ainsworth Institute of Pain Management are uniquely trained and specialize in the treatment of pelvic pain, including PN. Our board certified pain management specialists can offer you a combination of treatment options for PN that are not available anywhere else.

What is Pudendal Neuralgia? 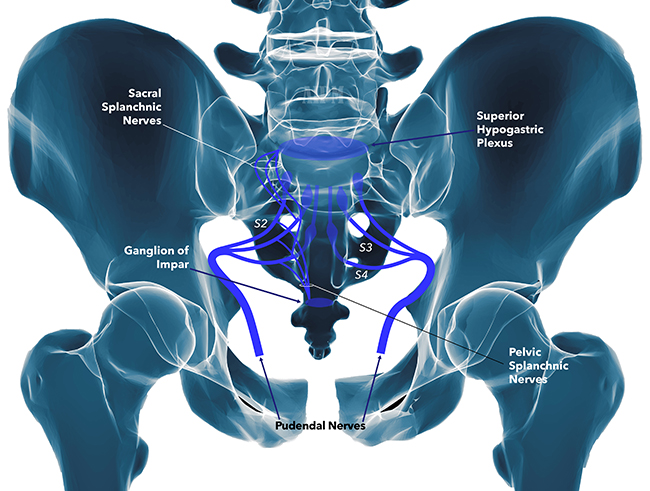 Entrapment is one possibility that has been of increasing interest to physicians as it suggests a surgical or treatable solution. This is when the tissue that surrounds the pudendal nerve becomes inflamed and pinches it. Entrapment typically occurs in one of 3 regions:

Between the sacrotuberous and sacrospinous ligaments (interligamentous plane)
Alcock canal
As the nerve passes through a tight osteofibrotic canal at the entrance to the base of the penis.[11]

Pudendal Neuralgia is more common in women than men (7:3). In fact it is often called “obstetric neuropathy” because of it’s prevalence during childbirth. The average age of PN’s onset is 50-70.

Anatomy of the Pudendal Nerve

The Pudendal nerve is derived from anterior divisions of the ventral rami of the S2, S3 and S4 nerves of the sacral plexus. It accompanies the internal pudendal artery along the lateral wall of the ischiorectal fossa in the pudendal canal. The pudendal nerve carries sensory, motor, somatic and sympathetic innervation[8] and innervates the external genitalia of both men and women (including bulbospongiosus and ischiocavernosus), as well as the bladder and rectum.

Its course through the pelvic is complex and tortuous, yet predictable. The pudendal nerve originates in Onuf’s nucleus in the sacral region of the spinal cord, coursing through the pelvic region then exiting the pelvis through the greater sciatic notch between the piriformis and coccygeus muscles. It curves around the ischial spine and sacrospinous ligament and enters the perineum through the lesser sciatic foramen.[9] Its branches include the inferior rectal nerves, perineal nerve, and it terminates as the posterior scrotal/labial nerves and dorsal nerve of the penis/clitoris.

Pain in penis, scrotum, labia, perineum or anorectal region[2]
Pain with tight clothing like underwear or yoga pants
Pain on one side of the pelvic region as opposed to bilateral pain (both sides or centered)
Mild to severe burning and/or lancinating pain
Pain worsens when sitting down[3],[4]
Bowel and/or bladder incontinence
Painful ejaculation
Cutaneous hyperalgesia, deep tenderness, paresthesia, tingling, and/or numbness

That being said, pain can change over time.  The longer one has had pain, the more likely it is to move and spread…so what might have started out as textbook pudendal neuralga 1-2 years ago may look less and less like it now.

Pelvic pain is one of THE most difficult pain syndromes to treat – anyone who says any different is trying to sell something…and therein lies the problem.  There are a number of physicians marketing themselves as “Pelvic Pain Specialists” who have no business treating anyone with pelvic pain but unfortunately patients don’t know the difference until it is too late.  They know that patients with pelvic pain are so desperate that they will try anything new or different for the small hope of finding any shred of pain relief.

Learn More
What are the Causes?

Pudendal neuralgia can be caused by any one of a diverse group of mechanisms.

Childbirth – most common cause First and foremost is diagnosing IF it is actually pudendal nearalgia.  Your pain management physician will diagnose pudendal neuralgia according to the criteria established at Nantes in 2006. These include: The doctor will need to ascertain your complete medical history, conduct a comprehensive physical examination, and administer a diagnostic pudendal nerve block in order to determine if you satisfy these criteria for pudendal neuralgia. The pudendal nerve block is typically performed under ultrasound guidance as the nerve passes between the sacrospinous and sacrotuberous ligaments,[9] although it can also be accomplished with the aid of fluoroscopy with the target being the ischial spine. A response to the block is considered “positive” when you experience a temporary decrease, or even elimination, of pain.

Is a Sympathetic “Reset” Right For You?

Pudendal Nerve Block – This injection is considered to be the gold-standard, first line treatment not only for managing the symptoms of pudendal neuralgia, but for establishing a diagnosis of pudendal neuralgia in the first place. Typically performed under ultrasound guidance, your physician will insert a small needle along the course of the pudendal nerve and inject a small amount of local anesthetic (sometimes with the addition of cortisone). In the case of true pudendal neuralgia, pain relief will be immediate and dramatic.

S2 Dorsal Root Ganglion Block – The hard part of treating pelvic pain is finding which nerve or nerves is/are either the cause of the pain or is/are responsible for transmitting the pain signals.  The S2 level is unique in that it captures the bulk of the sensation coming through the pudendal nerve as well as 2 other nerves in case there is another nerve contributing to the pain.

Cannibus (aka Medical Marijuana) – Cannibus has shown to be effective in a variety of different types of chronic pain conditions. Medical marijuana is a personalized treatment whereby the pharmacist will interview you to discuss your pain and your medical history to create the proper blend and ratio to suit you, individually. It is a safe medical option with a low side effect profile.

IV Infusion Therapy – Over time, chronic pain becomes a learned behavior for the central nervous system.  After a few months, the spinal cord will rewire itself to the point that normal sensations that typically wouldn’t cause pain are now excruciating.  When this happens, the biochemistry of the central nervous is altered by a process called “maladaptive neuroplasticy.”  The only way to counteract that is with medications that act on the NMDA receptor, like ketamine.  This is a simple procedure commonly performed in the office. Your doctor will administer a small IV catheter, and then infuse ketamine and a combination of other medications intravenously in an attempt to halt the rewiring process and potentially reverse it.

Trigger Point Injections – This procedure involves using a thin needle to break up small contractures in local muscles called trigger points. These trigger points can cause pain in the pelvic region and contract around the pudendal nerve, essentially strangling it, causing the nerve to become painful. This modality is rarely as effective as a nerve block.

Botox Injections – This premise is the same as trigger point injections in that the goal is to relax the local musculature in the pelvic region by using Botulinum Toxin (Botox) to safely paralyze the implicated muscles in the area. Superior Hypogastric Block – This procedure can be used to treat pain in the pelvic and perineal region from a variety of causes simultaneously. A thin needle is inserted with the assistance of fluoroscopy through the skin and advanced toward the L5 vertebra at the location of the superior hypogastric plexus. A blockade here has been reported to decrease pelvic pain by 70%.[12]

Ganglion of Impar Block – The premise of this procedure is the same as the superior hypogastroc block, however the target here is the ganglion of impar – another structure located in the pelvic region also implicated in moderating pelvic pain. This procedure is also performed under fluoroscopic guidance with the target being a small area directly in front of the coccyx (tailbone). This modality is extremely effective in treating pelvic pain and studies have reported 70-100% pain relief from this procedure.[13]

IV Infusion Therapy – An increasingly popular procedure for treating a variety pain syndromes, as well as depression and anxiety. Patients are hooked up to an IV and special medications are administered intravenously. The infusions can take as little as 30 minutes to complete.

Spinal Cord Stimulation (SCS) – This is a commonly performed procedure for a variety of pain syndromes. SCS utilizes technology similar to that of cardiac pacemakers whereby small electrodes are placed into the epidural space near the spinal cord. These electrodes will produce a small electrical current over the spinal cord that interfere with pain signals. In the case of pelvic pain, the leads are placed over the sacral nerve roots or in the thoracic region.[13] In recalcitrant cases of pudendal neuralgia, a paddle lead can be placed over the conus.[14]  Our doctors at the Ainsworth Institute have pioneered a unique lead placement combination that isolates the pain of the pudendal nerve and are reported amazing successes. – This amazing therapy only became commercially available in the United States in 2016, however it was already available in Australia and Europe for 8-9 years before that.  Dr. Hunter performed one of the very first in the country and has been chosen to teach this procedure to others due to his high level of expertise.  Since that time, we have treated a number of patients with pudendal neuralgia and the results have been astounding!  The DRG acts like a filter in normal nervous systems, however conditions like Pudendal Neuralgia cause that filter to turn off, letting excessive sensation to get into the spinal cord – that sensation becomes painful.  That is why normal activities like sitting feel painful.  In DRG Stimulation, a small electrode is placed over the DRG that sends an electrical signal to turn the filter back on.  The results are almost instantaneous.  See if you are a candidate.

Peripheral Nerve Stimulation – The premise is similar to SCS but rather the leads are placed on the affected nerve – in the case of PN, the lead is placed on the pudendal nerve.[15]

Intrathecal Pumps – A small catheter is placed in the subarachnoid space (just below the epidural space) and extremely small amounts of medication are slowly delivered directly over the spinal cord. This enables your physician to provide the same medications you might take orally to manage the pain but at a fraction of the dose – thus decreasing the side effects.  More importantly, our doctors have been putting a revolutionary drug inside the pumps called ziconotide and are reported amazing successes!

The doctors at the Ainsworth Institute of Pain Management specialize in managing and treating Pudendal Neuralgia. Dramatic improvements in pain and quality of life are a single phone call away. Schedule an appointment today with one of our board certified pain management experts to discuss what options for treatment may best suit your needs.